Introducing animal genes into common crops has enabled scientists to massively increase their yield and make them more resistant to drought, according to a new study.

A consortium of researchers from the US and China manipulated the ribonucleic acid, or RNA, of potato and rice plants by adding a gene called FTO.

In addition to growing significantly larger, the plants increased their rate of photosynthesis and produced longer root systems, which could enable them to better withstand a drought.

The research, published in the journal Nature Biotechnology, adds a new wrinkle in the ongoing debate about genetically-modified foods.

‘The change really is dramatic,’ co-author Chuan He, a chemical biologist at the University of Chicago, said in a statement. ‘What’s more, it worked with almost every type of plant we tried it with so far, and it’s a very simple modification to make.’ 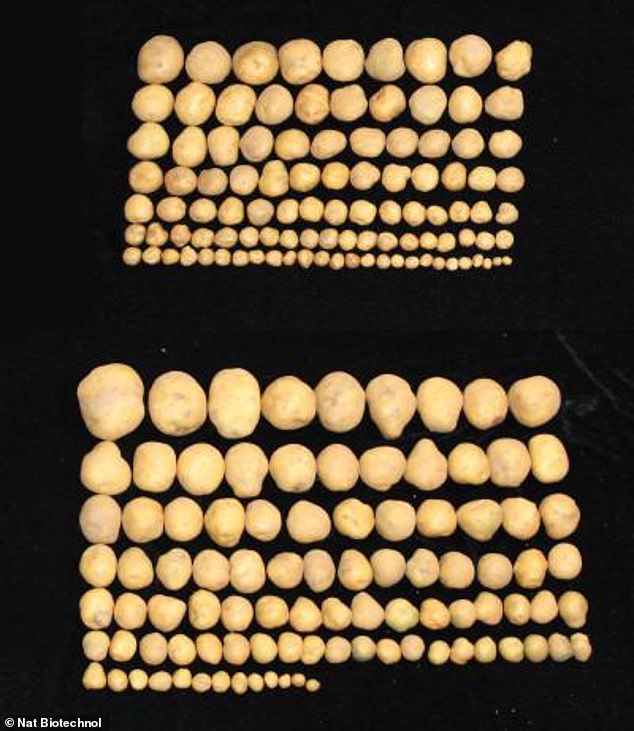 Scientists spliced potatoes with the FTO gene (bottom) , resulting in vegetables that were 50 percent larger. They maintain the process could be a major solution to food insecurity and climate change

Nobel-prize winning economist Michael Kremer, who was not involved in the research, suggested in the university’s statement that the process could ‘help address problems of poverty and food insecurity at a global scale—and could also potentially be useful in responding to climate change.’

In 2011, He’s lab determined that RNA molecules in mammals don’t just blindly follow a DNA blueprint—they can actually regulate which genes get expressed and which don’t, via chemical markers that control which proteins are made and how many.

He and Guifang Jia, a molecular engineer at China-based Peking University, wanted to explore how that would impact plant biology.

FTO is known to erase some of the chemical markers on RNA that control genetic instructions—the researchers believe, when introduced into the crops, it ‘muffles’ some of the signals telling them to reduce growth. 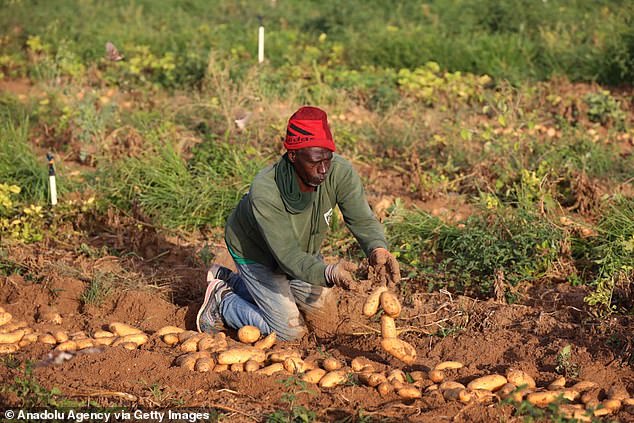 After seeing results with rice plants, they tried with potatoes, part of an unrelated plant family, and the outcome was just as impressive.

‘That suggested a degree of universality that was extremely exciting,’ Professor He said. ‘We rely on plants for many, many things—everything from wood, food, and medicine, to flowers and oil—and this potentially offers a way to increase the stock material we can get from most plants.’

The impressive results involved splicing FTO into a plant, raising the hackles of animal rights advocates.

‘These experimenters might just be depriving vegetable growers of their main market—vegans and vegetarians who avoid animal bits and pieces in their food,’ PETA senior vice president Kathy Guillermo told DailyMail.com.

But Professor He believes ultimately the same results could be achieved without adding animal genes. 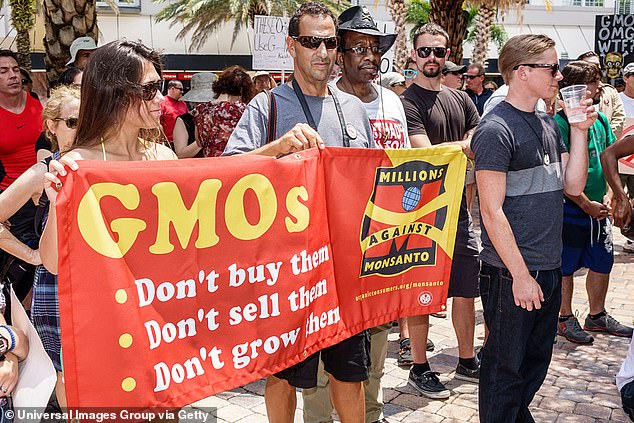 Critics complain that genetically modifying foods can have unintended consequences on both the environment and human consumers. While the new research involved splicing an animal gene into vegetable crops, the scientists believe they can refine the process ‘using the plant’s existing genetics’

‘This is a brand new type of approach, one that could be different from GMO and CRISPR gene editing; this technique allows us to ‘flip a switch’ in the plants at an early point in development, which continues to affect the plant’s food production even after we remove the switch,’ He said.

‘It seems that plants already have this layer of regulation, and all we did is tap into it. So the next step would be to discover how to do it using the plant’s existing genetics.’

Professor He imagines other benefits to bulking up flora beyond bumper crops.

‘Perhaps we could engineer grasses in threatened areas that can withstand drought,’ He said. ‘We could teach a tree in the Midwest to grow longer roots, so that it’s less likely to be toppled during strong storms. There are so many potential applications.’

WHY ARE PEOPLE CONCERNED ABOUT GENE-EDITED ‘FRANKENSTEIN FOODS’?

‘Frankenstein foods’ are crops or meat that has been produced through genetic engineering.

Plants and farm animals have genes changed or removed to make them more resistant to certain diseases and pests, or to grow unnaturally large.

To make these modifications, viral DNA is used to alter genes, raising health concerns among some groups.

A number of people feel the long-term effects of genetically modified (GM) foods on human health are not yet adequately understood.

According to the UK-based Nuffield Council on Bioethics (NCB): ‘The current evidence from safety assessments of GM crops does not suggest any significant risks to people who eat them.’

The foods also present environmental concerns, as GM crops could reduce the variety of plants and animals in the wild, otherwise known as biodiversity.

The transfer of genes between modified and unmodified plants may also lead to unexpected consequences, for example an irreversible or uncontrollable ‘escape’ of genes into neighbouring wild plants by pollen.

The NCB says: ‘We are not persuaded that possible negative results of gene flow in some areas are sufficient to rule out the planting of GM crops elsewhere in developing countries.’