In a world where the urgent need to tackle climate change is clear, it is a shocking fact that 40 per cent of all the food grown on our planet goes uneaten.

More than four million square kilometres of land – roughly equivalent to the land mass of the Indian subcontinent – is used to grow this wasted food.

And when you calculate the resources used to farm that land, food wasted across the world can be held directly responsible for about four per cent of global greenhouse gas emissions. This is the stark reality set out in a new report, Driven to Waste, published by the World Wide Fund for Nature (WWF) in partnership with Tesco.

It’s been some time since the global levels of food wasted on farms have been quantified – and our report estimates that the total is an incredible one billion tons higher than previously thought.

Food waste on farms isn’t just an issue for low-income countries, where industrial practices are still developing. Good food is being lost or wasted at farms on a vast scale in developed economies too.

In a world where the urgent need to tackle climate change is clear, it is a shocking fact that 40 per cent of all the food grown on our planet goes uneaten. Pictured: Ken Murphy

Notably, the report reveals that high and middle-income regions like Europe, North America and industrialised Asia contribute 58 per cent of global food waste that occurs at harvesting – in other words, before it even leaves the farm gate.

It needn’t be this way. We can avoid an enormous proportion of this waste with the right joined-up action from the entire food industry and governments across the world.

And this action starts with measurement and reporting. Because what gets measured, gets managed.

The immediate answer is something called Target-Measure-Act.

This is a three-step programme that can be used by anyone involved in producing, manufacturing and selling food to set targets, measure their waste and ultimately take action to eliminate it.

Tesco was the first UK retailer to publish food waste data back in 2013 and the first to implement Target-Measure-Act across its entire supply chain. Why? Because we knew it would drive action.

Across the Tesco group, we have reduced food waste by 42 per cent since 2016/17 and are making good progress towards our ambition of halving it by 2030. We now report food waste data for every market in which we operate and have worked with 71 of our largest global suppliers to cut 200,000 tons of food waste from our combined operations.

If it works for us, it can work on farms too. But they will need help along the way.

Our achievements have taken real collaboration, partnership and innovation. For example, we brought together two of our major suppliers – G’s (a grower of fresh produce) and AM Fresh (a fresh juice manufacturer) – to create a new range of cold-pressed juices using fruit and vegetables that don’t quite make the grade to sell in-store. In Lincolnshire, we partnered our potato grower, Branston’s, with our ready-meal supplier, Samworth Brothers, to turn good potatoes that don’t quite make the grade for our packs, into mashed potato and ready meals.

Further afield, we work with our growers in Kenya to help them donate surplus fresh produce to make nutritious meals in schools and communities. 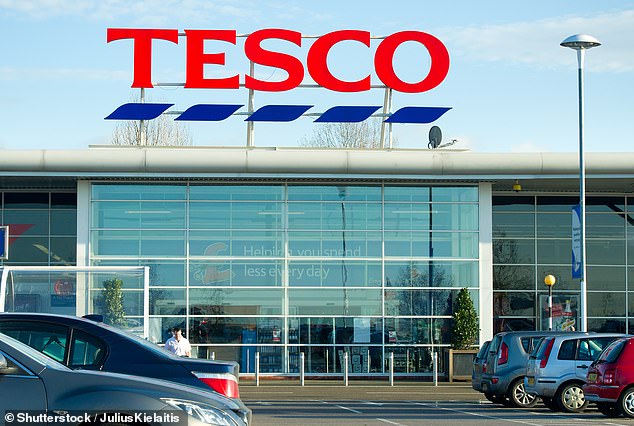 Tesco was the first UK retailer to publish food waste data back in 2013 and the first to implement Target-Measure-Act across its entire supply chain. Why? Because we knew it would drive action (file photo)

In South Africa, our avocado grower, Westfalia Fruit, has diversified its business to turn fruit that isn’t quite right for our shelves into guacamole and avocado-oil products.

If more food firms and producers collaborated like this, we could reduce food waste on a massive scale in the UK and abroad. It’s also in the entire industry’s best interests.

As well as helping Tesco suppliers get more of their food to market, our efforts to tackle on-farm food waste have helped us better plan stock levels – and offer the best price to our customers. For example, by broadening the size and shape guidelines of the produce we buy, we can purchase the whole crop from our growers. When growers have a bumper harvest, we simply sell ‘wonky’ fruit and veg in our Perfectly Imperfect range at market-leading prices.

We’re confident at Tesco that the actions we’re taking are helping us to deliver a better shopping basket for our customers and the planet.

But there is still more to be done. In the coming months, more of our suppliers will report on levels of waste on their farms for the first time.

Where we see high levels of waste, we will look at taking further action to eradicate it at the very start of the supply chain.

Yet however hard Tesco works with our own suppliers, truly turning the tide on food waste at farm level will require wider industry and Government action.

We need the Government to put the spotlight on this much-ignored issue and engage the entire food supply chain in halving food waste at every stage. After all, under the UN’s Sustainable Development Goal for food waste – which the UK is signed up to – we have until 2030 to hit that target as a country.

So today I urge every food company to join Tesco in tackling this destructive menace to our planet. The time to act is now.