Lord Ashcroft, the former deputy chairman of the Conservative Party, has announced his next book will be a biography of Carrie Johnson.

The peer has promised to lift the lid on Mrs Johnson’s life, describing her as an ‘impressive person’.

The book from the author and pollster will follow his unauthorised biography of Sir Keir Starmer called ‘Red Knight’ which is due to be published next month.

Lord Ashcroft, pictured arriving at Tory Party conference in August 2016, has announced his next book will be a biography of Carrie Johnson 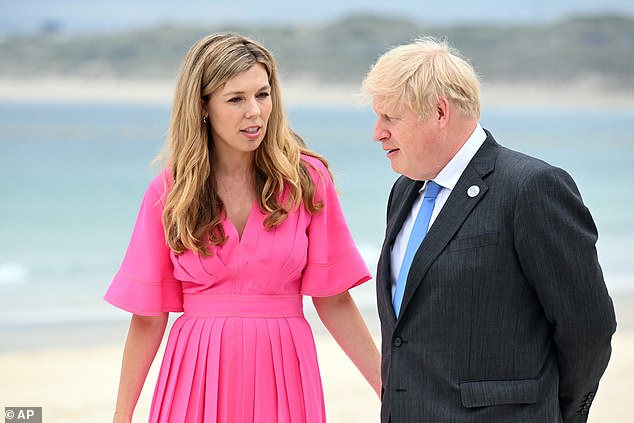 The peer has promised to lift the lid on Mrs Johnson’s life, describing her as an ‘impressive person’

Lord Ashcroft tweeted: ‘Pleased to report my next book will be a biography of [Carrie Johnson].

‘She is an impressive person – a high-level career in politics and a record of campaigning on animal rights and the environment. Early research has proved fascinating.’

Writing on the Conservative Home website, the peer said the book will examine Mrs Johnson’s life and career before Downing Street.

He said: ‘Carrie has interested me for some time.

‘Many people know her as Boris Johnson’s wife, but her influence developed long before she moved into 10 Downing Street via her work over the last decade within the Conservative Party and also through the posts she has held working for government ministers.

‘Aside from politics, she has campaigned in the fields of the environment and animal rights, both of which are areas of great interest to me.’

Lord Ashcroft has previously published books on Rishi Sunak and Jacob Rees-Mogg as well as a controversial biography of David Cameron.

The latter included allegations about Mr Cameron’s student days, prompting accusations that the peer was seeking revenge after he was not offered a major job in the coalition government.

Lord Ashcroft insisted at the time that the book about Mr Cameron was ‘not about settling scores’.

The peer has said he expects his biography of Mrs Johnson to be published ‘early in 2022’.