That backfired! Shericka Jackson is OUT of the 200m sprint after JOGGING over the finish line… with careless Olympic 100m bronze medallist missing out on the semi-finals by four thousands of a second as fans blast ‘FOOLISH’ Jamaican star

Shericka Jackson has dramatically been knocked out of the women’s 200 metres after easing up way too early in her heat.

The sprinter won a bronze medal in the 100m as part of a Jamaican one-two-three alongside compatriots Elaine Thompson-Herah and Shelly-Ann Fraser-Pryce.

She was also hotly tipped to challenge for the slightly longer format, but slowed down far too much and was then dumped out of the competition. 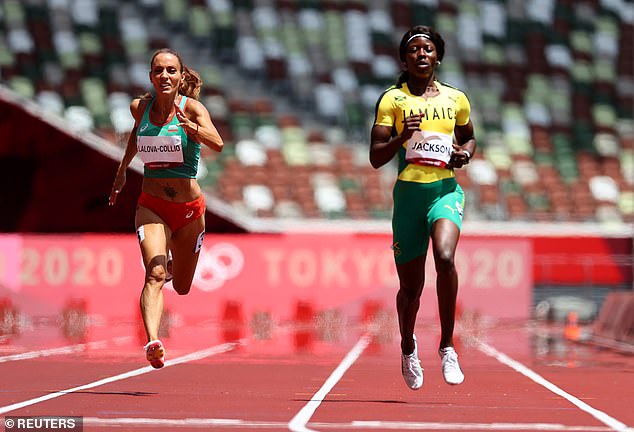 Former runner Steve Cram told the BBC: ‘Shericka Jackson was almost just jogging round – what on earth? Why take such risks? I’m sorry to sound exasperated but I am, on her behalf, on her coach’s behalf and her team-mates. It’s just not necessary.’

Two-time former world champion hurdler Colin Jackson added: ‘She looked at the starting list and thought ‘oh, I’ll get through this quite comfortably. But one of the things you don’t so is slow up – you run from the gun to the tape.

‘She made a mistake, it’s a costly one. The fans are going to miss an incredible race with her not being in it – she’s one of the fastest 200m runners in the world.

‘Craziness, just crazy. It’s really lazy performance. As a coach, I don’t think I could talk to my athlete for weeks if they did that.

Jackson, running in lane two, looked to be comfortably in the top three automatic qualifying slots in the fifth heat after coming into the straight.

Running in lane two in the fifth heat, she was comfortably in the qualification slots at first

She was pipped on the line by Italy’s Dalia Kaddari (in blue), who finished third and qualified

However, potentially to try to conserve energy, the sprinter started jogging with plenty of track still yet to cover.

Rather than look to her right to check on the positions of her competitors, Jackson carelessly seemed to be unaware of their presence and even seemed to lean back as she approached the line.

She was then pipped to the line by Italy’s Dalia Kaddari and did not make it through as a fastest loser.

Jamaican sprint coach Stephen Francis reflected that Jackson ‘misread’ the situation and that her inexperience at 200m level proved costly.

‘She obviously misread, she paid the price,’ he told Andre Lowe. ‘She is not a senior athlete, she is a senior athlete in the 400m and a rookie at the 200m. I expected her to do better. She will learn.’ 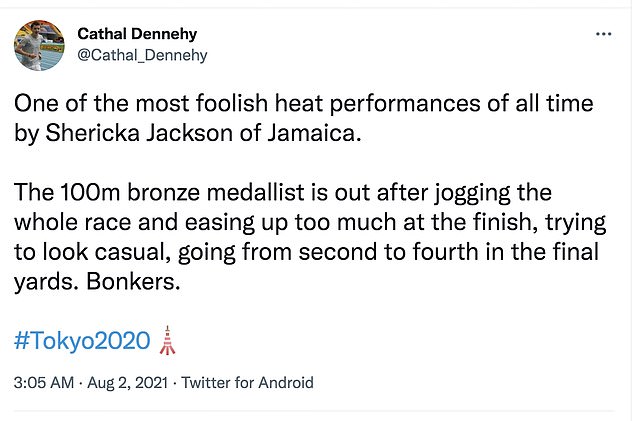 Fans took to Twitter to share their shock at Jackson’s ‘foolish’ decision to trot over the line in Tokyo.

‘One of the most foolish heat performances of all time by Shericka Jackson of Jamaica,’ one fan posted. ‘The 100m bronze medallist is out after jogging the whole race and easing up too much at the finish, trying to look casual, going from second to fourth in the final yards. Bonkers.’

‘I don’t know what was that,’ another said, while one fan wrote ‘It’s hard to comprehend really’.

Other supporters, searching for an explanation as to Jackson’s off-par performance, suggested that the Jamaican may have been nursing an injury.

‘Is she injured, I’m so confused. She just jogged the whole thing,’ one fan posted on Twitter. Another said: ‘Must have been injured. its difficult to explain such a run otherwise’.