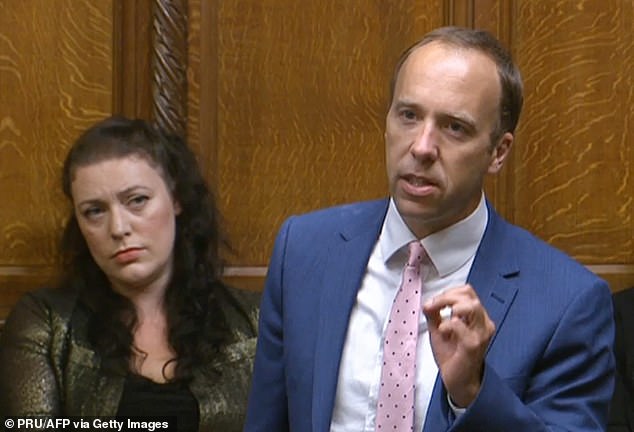 
Matt Hancock has apologised for being late registering shares in a medical company that had contracts with the NHS.

The then-Health Secretary declared in March that he had acquired 15 per cent of the shares in Topwood Ltd, which specialises in the secure storage, shredding and scanning of documents.

His sister Emily Gilruth also has shares and is a director of the firm, which was awarded £300,000 of business by NHS Wales this year.

Standards commissioner Kathryn Stone launched an investigation into whether Mr Hancock – who resigned in June after being caught kissing a colleague – breached the code of conduct over registering shareholdings.

And she has now concluded that he should have declared the interest earlier.

Matt Hancock declared in March that he had acquired 15 per cent of the shares in Topwood Ltd, which specialises in the secure storage, shredding and scanning of documents

Mr Hancock – who was not responsible for running NHS Wales as health is a devolved matter – had said his accountants notified him of the transfer on March 2, and he registered it on March 16.

But Ms Stone said: ‘After taking advice from the Registrar, I asked Mr Hancock to check with his accountants the date that the Topwood Ltd shares transfer had taken place.

‘In reply Mr Hancock provided correspondence from his accountants that stated the completion of the shares transfer occurred on 25 January 2021.’

In a message to the commissioner last month, Mr Hancock confirmed he accepted the decision and ‘apologised for the technical breach’.

Ms Stone said: ‘My inquiry concluded that, in failing to provide the correct information for his entry on the Register of Members’ Financial Interests, Mr Hancock acted in breach of paragraph 14 of the Code of Conduct for Members of Parliament.

‘Mr Hancock cooperated fully with my inquiry. He acknowledged his breach of the rules, 20 apologised, and set out procedures he now has in place to ensure no recurrence of this breach.’

Ms Stone said she was able to deal with the matter through the summary ‘rectification’ process because it was at the ‘less serious end of the spectrum’.

Topwood received a place on the Shared Business Services framework as a potential supplier for local NHS trusts in 2019, the year after Mr Hancock took charge at the Department of Health.

A probe by Lord Geidt, the independent adviser on ministerial standards, found earlier this year that Mr Hancock was guilty of a ‘technical’ breach of the rules after failing to declare that the company had become an approved NHS contractor. 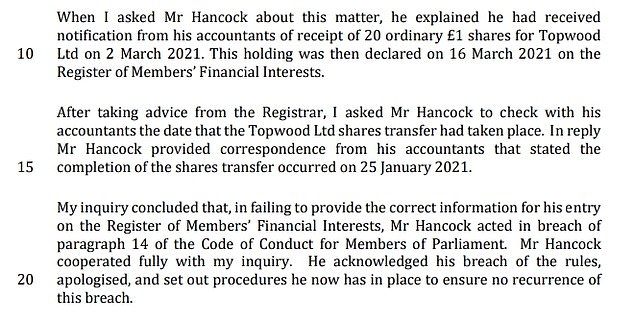 But the ministerial sleaze watchdog ruled the contravention of the code was ‘minor’ and did not call for the Cabinet minister to resign.

A government spokesman insisted at the time that Mr Hancock – who said he had a ‘delegated management arrangement’ for the ‘gifted’ shares – had acted ‘entirely properly’.

‘Mr Hancock has acted entirely properly in these circumstances. All declarations of interest have been made in accordance with the Ministerial Code. Ministers have no involvement in the awarding of these contracts, and no conflict of interest arises.’

After the situation was highlighted by the Health Service Journal, sources insisted Mr Hancock had discussed the issue with the permanent secretary before accepting the shares, and was told that any conflicts could be handled if they arise.

Mr Hancock was said to have no ‘active participation’ in the running of the company, and was not involved in awarding contracts.