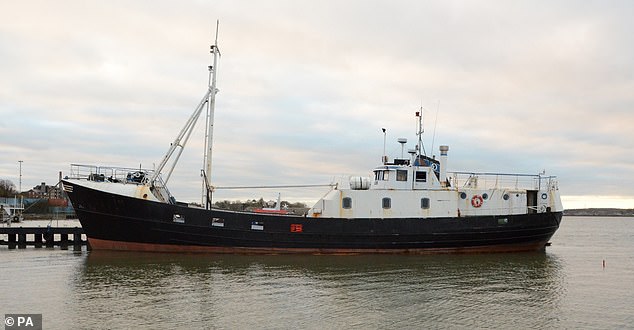 Nearly 70 Albanian migrants were smuggled into the UK on a converted fishing boat which only had enough life jackets to save 20 people, a court heard yesterday.

The 98ft trawler, called the Svanic, was crossing the North Sea from Belgium to Norfolk on November 17 when it was intercepted by UK Border Force.

It was escorted to Harwich in Essex where three members of the crew were arrested. Three other ‘UK-based organisers’ were later detained.

The Svanic, which was built in 1962, had been converted to hold 19 berths – far fewer than the numbers on board, the jury was told.

The 98ft trawler, called the Svanic, was crossing the North Sea from Belgium to Norfolk on November 17 when it was intercepted by UK Border Force

And it had a ‘maximum life-saving capacity’ of 20 people – meaning there were only a handful of life jackets for the 69 migrants and three defendants on the boat.

But he added that the use of such a large vessel was ‘unusual’ and ‘more sophisticated’ than other methods of crossing.

The most commonly used route for Albanians entering the UK illegally from Belgium is in heavy goods vehicles, at a cost of £2,000 to £3,000 per person.

Small boats, such as rigid hull inflatables, are also popular and charge between £2,000 and £4,000 per migrant.

But a fishing boat such as the Svanic – which would require resources such as crew, fuel and mooring fees – would have charged around £15,000 per person, Mr Badenoch added.

The jury was played an audio message from September last year in which one of the UK-based organisers can be heard discussing the profits involved. 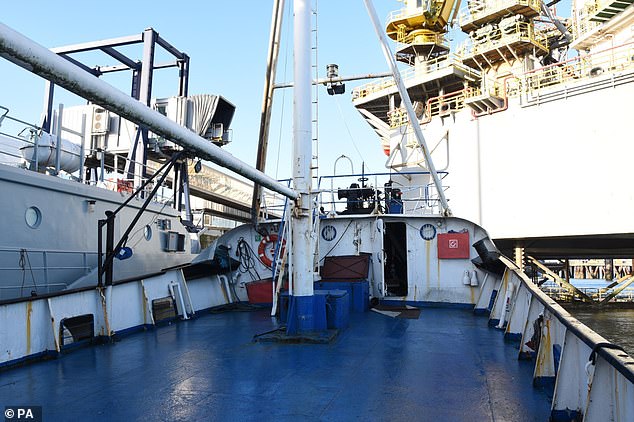 The Svanic, which was built in 1962, had been converted to hold 19 berths – far fewer than the numbers on board, the jury was told

In it Arturas Jusas, 35, who has admitted conspiring to assist unlawful immigration, can be heard saying: ‘We’re going to bring every week 50 people, yes, we need to invest now, £40,000, if you want, 20 you, 20 me. From first trip we’re going to get the money back.’

Commenting on the audio, Mr Badenoch said: ‘A single trip was therefore capable of returning £40,000 – at the very least – on the interpretation of that message.

‘The unlawful moving of people in the manner alleged in this case is highly lucrative and it was for that purpose that Svanic was being used.’

Ukrainian nationals Igor Kosyi, 56, and Volodymyr Mykhailov, 49, along with Latvian Aleksandrs Gulpe, 44, were on board Svanic and were arrested in Essex.

The Svanic left Latvia in late October and got into difficulty off the shore of Sweden, needing to be towed into port.

The vessel then headed to Denmark, where it incurred repair costs, then sailed on to Belgium.

Days later it was intercepted while heading towards England’s east coast and ordered to change course.

The case – which is expected to last between six and eight weeks – continues.