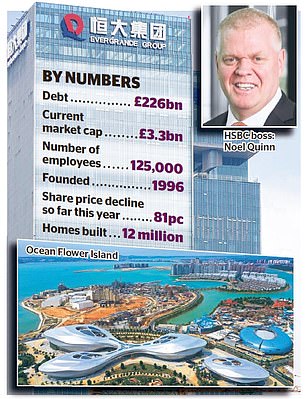 By Calum Muirhead For The Daily Mail


The boss of banking giant HSBC has warned that the crisis at debt-laden Chinese property developer Evergrande could affect markets – and it would be ‘naive’ to think otherwise.

Noel Quinn said at a Bank of America conference this week that the Evergrande situation was ‘concerning’, with capital and bond markets exposed.

He stressed HSBC would not be directly affected by Evergrande’s woes, saying that he felt ‘comfortable’ with the bank’s exposure to the Chinese property market.

‘I’d be naive to think that the turmoil in the market doesn’t have the potential to have second- order and third- order impact,’ he said. ‘Clearly with the changes that are taking place in the Evergrande situation it’s concerning. There is a potential for second and third-order impact, particularly on the capital markets and the bond markets, and we’ve got to stay close to that.’

He added: ‘Nothing has happened in the recent weeks that will change that position in my mind as a bank.’

Shares in Evergrande, the world’s most indebted developer, surged 17 per cent in Hong Kong yesterday after it secured a repayment deal with some of debtors, alleviating fears of collapse.

But it has not updated on the status of interest payments on some of its overseas bonds, which were due yesterday. If the payment is missed, it will have a 30-day grace period before being considered in default.

Since late August, when the firm first warned of its debt problems, the shares have plunged 38 per cent. The announcement calmed some investor concerns over debts of more than £220billion.

‘It’s too soon to say whether this is just a brief respite or it signifies that a rescue plan is in the works,’ Donald Low, director of the Institute for Emerging Market Studies at Hong Kong University of Science and Technology said.

Investment experts are waiting to see what China does.

‘Until there is certainty regarding how the government will deal with Evergrande, investors are likely to remain jittery,’ said Catherine Yeung, investment director at Fidelity International.

There are fears that a collapse could cause a domino effect across the Chinese economy that could spread to global markets, similar to the bankruptcy of Lehman Brothers in 2008.

The Evergrande crisis has emerged in the wake of Beijing’s broader crackdown on borrowing by Chinese property developers. The company’s liquidity crunch represents the latest regulatory risk for global investors after a chaotic year that has already ushered in unprecedented curbs on China’s technology and education sectors.