The US Pentagon is entrusting Elon Musk‘s SpaceX to deliver a national security satellite into orbit for the Space Force by means of a reused rocket.

The Falcon 9 booster is the same used to launch the GPS III SV04 satellite last November and today marks the first time a recycled rocket will be used in a similar mission.

The 230-foot-tall Falcon 9, topped with the GPS III SV05, is set to take off at 12:09pm ET from Cape Canaveral Space Force Station’s Launch Complex 40.

Once the satellite is delivered, the Falcon 9 will attempt to land on the ‘Just Read the Instructions’ droneship about eight minutes after launch.

The US Space Force device will join 31 other military satellites orbiting Earth more than 12,000 miles above the surface, which circle our planet twice a day.

The GPS satellites are designed to provide signals that are more accurate and powerful than previous generations.

In a briefing on June 14, USSF SMC deputy mission director Walter Lauderdal was quoted by CNBC as saying: ‘In preparation for this first-time event we’ve worked closely with SpaceX to understand the refurbishment processes and are confident that this rocket is ready for its next flight.

‘We continue to work with [SpaceX] and, looking ahead to the SV06 mission next year … we’ll be working with them as to what boosters are available. 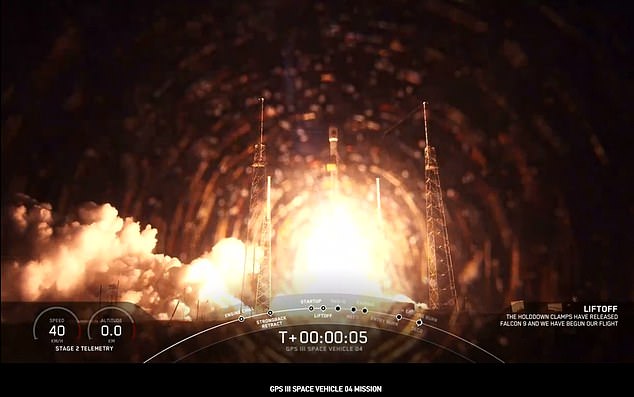 The 230-foot-tall Falcon 9, topped with the GPS III SV05, is set to take off at 12:09pm ET from Cape Canaveral Space Force Station’s Launch Complex 40. If all goes accordingly, the Falcon 9 rocket will ignite its nine Merlin engines just before take-off and shoot off toward space. Pictured is the same booster taking off in November

‘We are certainly open to using other boosters not just ones that have flown [for Space Force].

‘Taken as a whole, our disciplined approach is part of an uncompromising dedication to mission success executed one launch at a time.’

If all goes accordingly, the Falcon 9 rocket will ignite its nine Merlin engines just before take-off and shoot off toward space.

About two minutes into the mission, the first and second stages will separate, and the second stage will ignite its engines just seconds later.

And at three minutes and 27 seconds, according to SpaceX’s website, the fairing will be deployed.

The Falcon 9 is then set to make landfall on the droneship at approximately eight minutes and 33 seconds after lift-off.

However, the world will have to wait about 90 minutes to hear confirmation for deployment of the GPS III SV05.

So far, the US Pentagon has awarded SpaceX with five of the six GPS III satellite launch contracts, valued at $469.8 million.

Although using a reusable rocket will be a first for Space Force, the unit is currently looking at whether or not large rockets developed commercially can be used to deliver cargo quickly to hotspots around the world, such as war zones.

The aim is for the rockets to have the capability of transporting up to 100 tons of cargo to a wide range of locations. 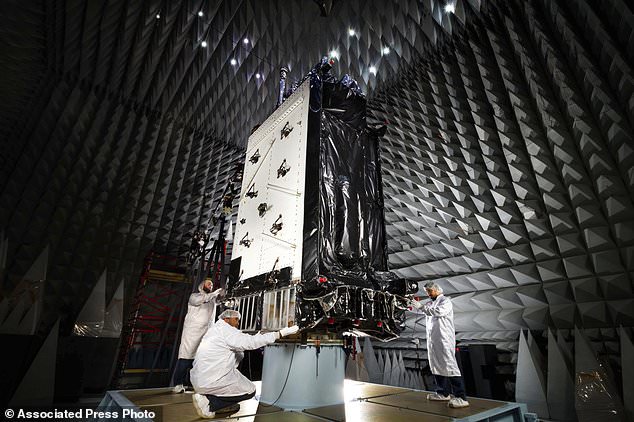 Space Force could also look at rockets that may be able to ‘air drop’ cargo after arriving at a destination without landing at all, according to CBS News.

‘This idea has been around since the dawn of spaceflight,’ Greg Spanjers, who is manager of the Rocket Cargo program at the Air Force Research Laboratory, told CBS.

‘It’s always been an interesting, intriguing idea [but] it’s never really made sense in the past.’

SpaceX is currently the leader in large rockets with its massive Starship, but Space Force has not confirmed whether or not the Musk-owned firm is part of the research.

Spanjers pointed out that the idea is being studied now because technology is catching up, with companies such as Blue Origin and United Launch Alliance trying to follow in SpaceX’s footsteps.

‘We don’t see SpaceX as being the only viable provider of this capability,’ Spanjers said, adding that a ‘number of providers’ may compete for contracts for the study.